Phyllo Dough Crinkle (Mesh Om Ali Recipe) is an incredibly easy to make, delightfully delicious dessert made up of folded sheets of phyllo dough, soaked and flavored with an amazing combo of milk and eggs, then topped with pistachios and drizzled with simple syrup.

Flaky and crispy on the outside and tender and juicy from the inside, this Phyllo Milk Pie tastes like a slice of heaven in every bite!

It Tastes as Good as It Looks!

There's nothing better than sharing a good recipe. It brings me so much joy that it transcends the pleasure of eating.

Between the incredible taste, the ease, the speed, the flaky creamy texture, and the fact that everyone who tried it said it was one of the most delicious desserts they'd ever tasted… I'm sure you'll fall in love with Mesh Om Ali.

Today's recipe, which translates to "Not Ali's mother" is one of the most trending recipes on Tiktok now a days. An unusual name for a recipe, huh? 🙂

So Where did this Recipe Get Its Name from?

In short, the legend says that Om Ali was the first wife of Sultan Ezz El Din Aybek. When the Sultan died, his second wife had a dispute with Om Ali, which resulted in the death of the second wife. Om Ali made a dessert to celebrate the occasion and distributed it among the people of the land.

This recipe is similar somehow to the original Om Ali but with some tweaks. The name "Mesh Om Ali" means that this is not the same recipe as "Om Ali". (Mesh) translates to (not) in Arabic.

Crunchy on the Outside, Creamy on the Inside

Om Ali is the Middle Eastern version of bread pudding. It's made with puff pastry or similar slightly sweet crackers/cookies/palmiers, in addition to other ingredients like sugar, milk, nuts, and raisins. Spices like cinnamon, saffron, and cardamom can be added to enhance the flavor. It's one of the best winter desserts that is easy to layer and bake.

On the other hand, Mesh Om Ali is a delightfully easy to make pastry made of golden, crispy phyllo pastry, soaked and flavored with a luscious combination of milk and eggs (some add whipped cream or sweetened condensed milk), then topped with a sprinkle of nuts and spices, if desired.
The outside is delightfully crunchy, the inside is creamy and milky, and the whole thing is simply dreamy.

Why You Will Love this Phyllo Milk Pie?

Mesh Om Ali has a sweet, milky, warm and comforting texture mix. The pistachios on top, the puff pastry's crunchy edges, and the soft center of the soaked pastry will make your taste buds sing. It also smells fantastic as soon as it comes out of the oven.

And, best of all, this recipe is extremely simple to prepare and bake! Though you may think it took hours to make, it's one of the simplest desserts I've ever made, and I adore it for its flavor and texture.

A Happily-Ever-After to Supper

What Do You Need to Make Mesh Om Ali?

You'll only need a few ingredients to make this heavenly dessert:

Phyllo Sheets:  These are the heart and soul of the dish. You will need to crinkle two phyllo sheets to get this accordion shape.

Melted Butter: Butter helps the phyllo become so crunchy.  Feel free to use ghee or clarified butter instead if you prefer.

Milk:  I use whole milk for richness. Milks adds a creamy texture and a rich flavor to the dish.

Eggs: You need eggs to mix with the milk and make the creamy mixture.

Pistachios:  These add a nice crunch and a beautiful color to this dessert, so finish off the dish with a handful on top. You can also use toasted hazelnuts, almonds, raisins and unsweetened shredded coconut. Add whatever nuts your heart desires.

Simple Syrup: Simple syrup gives this recipe it's heavenly sweet taste. The combination of attar and crunchy pastry is divine!

Can I use other nuts?

Pistachios or walnuts are the most commonly used nuts in this recipe. But you don't have to use just one or the other. You can use a combination of nuts, the more the better!

How do you know when phyllo is done?

When the top is golden and looks crispy, you will know that phyllo is done. Let sit for 5 minutes before serving.

What temperature do you cook filo pastry at?

The best temperature to bake phyllo pies and pastries is approximately 350 F / 175 C on the rack just below the middle of the oven.

It's better to serve this phyllo milk pie 10 minutes after removing it from the oven. As it cools down, it will lose some of the outside crispiness.

Pour cold and not hot simple syrup on top. This will ensure that your phyllo stays crisp rather than soggy. Don't know how to make simple syrup? I've got you covered!

This dessert is best served warm, however, you can store left overs in the refrigerator for 2-3 days. If you like to eat them hot, you can microwave them.

Get Your Fork and Dig In!

How To Assemble Phyllo Milk Pie

First, preheat the oven to 350 degrees F and spray the baking dish with oil.

Next, crinkle two phyllo sheets at a time and place them in a baking dish. Keep repeating until the baking dish is full.

Bake for ten minutes and then take it out of the oven. Pour melted butter evenly on top. Place the crinkle back in the oven for ten more minutes.

Then, mix milk, eggs, and sugar; whisk until well combined. Take the crinkle out of the oven and evenly pour the mixture on top. Sprinkle with chopped pistachios.

After that, place it back in the oven and bake for 30-40 minutes or until its golden and crispy on top.

Finally, Take it out of the oven and pour cold simple syrup on top.

Let it cool down for ten minutes, and then cut and serve.

OTHER DESSERTS YOU WILL ENJOY:

If you’ve tried this recipe or any other recipe on Sourandsweets, don’t forget to rate the recipe and leave me a comment below! I would love to hear about your experience with my recipes. Please share it with me on Instagram. 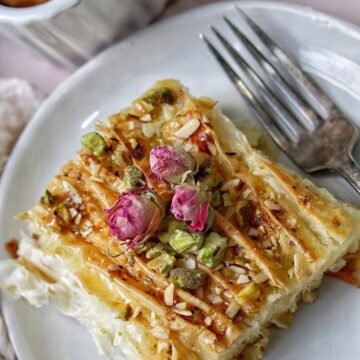 Hi there! I am Jeehan; welcome to my food blog and kitchen. I live in Dallas, Texas, with my wonderful husband and two sons. I am a full-time Mom and a passionate cook