Molokhia is a love story in our house, and when it's on the table, everyone gets thrilled about dinner. It's one of our favorite comfort foods that we can't have enough of!

Molokhia, also called Mulukhia, is an earthy dish in which jute mallow leaves are minced and cooked in broth. In Ancient Egypt, this soup was usually eaten by royalty, but eventually became a very common dish. It is said that it was the Pharaoh's favorite! So let’s give this Chicken Molokhia Soup a-go!

Such A Hearty Soup!

Molokhia or Mulukhiyah are the leaves of Corchorus olitorius. In English, it is called Jews Mallow or Jute Mallow.

Molokhia is also known as Molokia because it was eaten by royalty (Malek) in Ancient Egypt.

Molokhia is popular in Middle Eastern countries and African countries. People use it as a leafy green vegetable, where it isn’t eaten raw but cooked, as a soup or stew.

In Arab countries, Molokhia is cooked with lots of garlic, chicken broth, and small pieces of chicken. It is served with an amount of rice alongside fresh lemon juice.

Molokhia has numerous impressive health benefits that will surprise you! It is a great source of various vitamins and minerals. Molokhia contains vitamin A, vitamin C, and vitamin E, as well as potassium, iron, calcium, and magnesium.

As Molokhia is a popular middle eastern dish, then these green leafy vegetables are cooked in different ways and versions like:

Egyptian Version:  It is a green soup made up of minced Molokhia leaves and chicken broth. Usually, Egyptians use Montana Molokhia to make this soup. It is served with pita bread or vermicelli white rice.

Palestinian Version: Palestinians cook Molokhia in both versions: soupy and leafy, yet the soupy one is the more common. They serve Molokhia with green olives and lemon wedges.

I love making this frozen Molokhia recipe! It is a hearty soup with an amazing slimy texture that you can’t resist. To make this recipe, you will need the following ingredients:

Molokhia: Use 400 grams of frozen minced Molokhia, which is equivalent to one bag of minced jute leaves.

Oil: You can use any light oils. I prefer to use light olive oil or corn oil in this recipe. They add a unique flavor for this soup.

Small onion: For this recipe, I used one sliced onion to boil chicken and one finely chopped onion to the soup. Onion provides the authentic flavor base of the broth and soup.

Bay leaves: It has a unique aroma that helps lighten up a hearty chicken broth. In this recipe, you will need three bay leaf to the chicken broth.

Cardamom pods: Add two cardamom pods to the hot water before boiling the chicken. It gives an authentic flavor to the chicken broth.

Spices: In this recipe, you will need black pepper and seven spices.

Maggi cube: Add one Maggi cube to the chicken broth. It gives color and delectable flavor.

Salt: According to taste.

How to store Chicken Molokhia Soup?

To store this soup, let it cool at room temperature, then put it in a well-sealed container in the refrigerator.

How long can I store Chicken Molokhia?

You can store this soup for up to 3-4 days in a well-sealed container in the refrigerator.

How to reheat Molokhia Soup?

You can reheat it in the microwave or on the stovetop. Before you reheat the soup, it is preferable that you defrost it at room temperature for 15 minutes at least.

Can I freeze Chicken Molokhia Soup?

Yes, you can. However, it is better to eat Molokhia on the same day or the next day. Freezing may affect its flavor and texture. In the freezer, you can store for up to 3 months.

Where can I find seven spices?

You can find seven spices in Middle Eastern stores.

Can I make this Molokhia soup vegan?

Yes, for sure. The vegan Molokhia is made the same way, yet substitute the chicken stock by vegetable stock.

In this Molokhia Egyptian dish, you can boil chicken breasts or a whole chicken instead of chicken quarters.

The cinnamon stick is a popular addition to Lebanese meat dishes when cooking chicken or beef meat. You can add 2-3 cinnamon sticks when the chicken broth is simmering.

A hint of tartness and sweetness flavors is to add tomato paste to this Egyptian Molokhia recipe. Any type of tomato sauce will do!

You can use white onions, red onions, brown onions, or sweet onions. However green onions don't work for this Egyptian food.

Once You Start, It's Difficult To Stop!

How to Cook Molokhia with Chicken?

How to Cook Chicken?

First, bring 5 cups of water to boil over high heat in a large pot, and add the bone-in chicken along with the spices, garlic cloves, and onion slices.

Next, cook for 40 minutes over low heat until the chicken meat is tender and no longer pink.

Then, remove the chicken, debone it, and set it aside in a large bowl.

Finally, sift the chicken broth and set it aside in a large saucepan.

How to Cook Frozen Molokhia?

First, heat the oil in the same pot we cooked the chicken. Add garlic, onions, and parsley. Sauté for one minute.

Next, add the chicken pieces to the mixture along with seven spices, salt, and black pepper. Cook for 3 minutes on medium heat.

After that, add frozen Molokhia to the mixture, pour the chicken broth on top of the Molokhia and cook on medium heat covered for 15 minutes.

Finally, serve it with pita bread, fresh lemon juice, or Vermicelli Rice according to personal preference.

Other Recipes to Check Out:

If you’ve tried this recipe or any other recipe on Sourandsweets, don’t forget to rate the recipe and leave me a comment below! I would love to hear about your experience with my recipes. Please share it with me on Instagram. 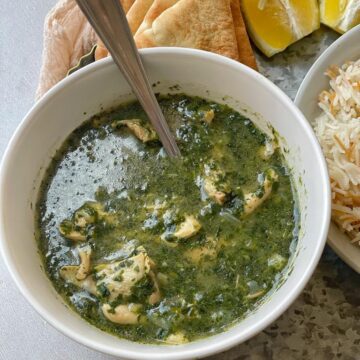 Nutrition: Please note that the nutrition label provided is an estimate only.

Hi there! I am Jeehan; welcome to my food blog and kitchen. I live in Dallas, Texas, with my wonderful husband and two sons. I am a full-time Mom and a passionate cook